Two days ago I returned from my first vipassana meditation course. Ten days of intensive meditation in total silence. When people ask “how was it?”, I fall silent again. It’s impossible to give a five second grab. So here’s a 10 minute one: my take on a life changing experience.

What the f*** is vipassana anyway?

Vipassana is a meditation technique first used by Siddhartha Gautama or Buddha, that chill dude who lived 2500 years ago. You probably have an image of him somewhere in your house, purchased for $4.99 at Ikea or Target. I certainly have a few.

The idea is approximately thus: in order to become enlightened, we need to know that everything is temporary (the Sanskrit word for this temporariness, which I have now heard about six million times, is ‘anicca’, pronounced a-ni-tcha). According to vipassana we need to do more than (a) know this in a superficial, passing way, more than (b) understandthe scientific actuality of this fact, that everything is in flux and constantly changing and inherently impermanent. We need to (c) experience, and the only way we as humans can have a direct experience of this impermanence is by feeling it – sensing it – experiencing it in our own bodies.  Self-transformation through self-observation. 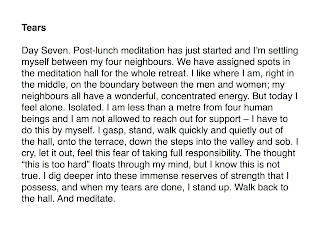 Goenka, the dude who until his death in 2013 was the wonderfully intelligent and wise leader of this vipassana meditation movement, emphasised the secular nature of vipassana. There is no dogma or theory to be accepted. You can practice vipassana alongside your religion. It does encompass a moral code, which basically boils down to ‘be kind to yourself and others’ (no lying, stealing, cheating, that kind of shiz). It’s practical; as Goenka noted, you can read a million books and discuss theory until the cows come home. But being on the path to enlightenment, or even heading in its vague general direction, is a practice. You have to do the work.


Do sweat the technique

As such, the focus throughout the retreat is on technique. The first three days are a warm up, meditating on the natural breath and focusing on the sensations around the nose and upper lip. This focus gives you the ability to tune into the subtle sensations that arise in the body. Heat, cold, tingling, itchiness, vibrations, pain, whatevs. The idea is just to observe these sensations as they arise and pass, and in doing so have a personal experience of the impermanence of everything (and eventually, about a zillion years later, become enlightened). The actual vipassana meditation technique is only taught from the fourth day. You start with full body scans, checking the body carefully for sensations and observing these. Eventually it evolves into a kind of flow of awareness and attention through the body. Sometimes the energy flows freely, sometimes there are blockages. Both are temporary.

What’s so spesh about vipassana?

Vipassana is different to many other meditation techniques in the following way: often when you meditate you focus on controlled breath, or an object, or a mantra, or a visualisation. This soothes and concentrates the mind, which feels nice. Win, right? In Goenka’s view, not so much. It’s like, say you’re crying your eyes out, and someone hands you an icecream. You stop crying because: icecream. But the reason you were crying remains unaddressed. Similarly, if you distract the mind with an image or whatever, it’s a superficial fix – you’re not looking at, let alone resolving, what is causing the fluctuations.
Because there is no focus on anything other than the subtle sensations, reverberations and vibrations of your own body, vipassana goes deeper, delves into the unarticulated and even the unknown. Through vipassana (this is going to get a bit techy, soz), you let go of the existing sankharas, or negative energy, you have accumulated as a result of the reactions you have to the sensations you experience. These reactions fall into two categories: craving and aversion. When a sensation crops up, you either like it and want more (crave), or don’t like it and want less (avert). The idea is to observe sensations and, rather than respond with craving or aversion, maintain total equanimity. Observe as things truly are, and not as you want them to be. Perhaps trite to say, but this is WAY easier said than done.

Why I finally decided to do this

Not to become enlightened. My affection for steak, sex, shiraz and other sensual pleasures is way too strong to contemplate reaching the end of this path in this lifetime. I wanted to relieve myself from the often powerful negative thought patterns in my head. Honestly, I didn’t even know for sure in advance if this was possible at a vipassana meditation course. But I smiled with gleeful anticipation in the first day’s lecture as Goenka explained that we would be performing ‘mental surgery’ on ourselves, cutting out old habits, old behaviour, old beliefs. Clearly I am something of a masochist.

Vipassana is practiced in more than 90 countries in hundreds of different centres, so every retreat is different. This one was held at a slightly run down retreat centre on a hillside near Faro in southern Portugal. About 80 people attended, 45 women and 35 men, and 10 people served (cooked food and cleaned up – legends). There were two managers, one male and one female, and two teachers, an incredibly zen Portuguese couple. Accommodation varied from decent (proper beds, private bathrooms) to rudimentary (crappy mattresses on a dormitory room floor). I was in the latter. There were lovely gardens surrounding the centre but these were mainly out of bounds. Men and women do not interact throughout the course at all. Separate accommodation, dining room, bathrooms, garden areas. It seems old school but it helps, trust me.

From Day Zero 6pm until Day Ten 10am, we maintained ‘noble silence’ which means not only no speaking, but no looking at faces/ eyes and no gestures. No communication whatsoever. The final day, our vipassana sessions were interspersed with warm-fuzzy metta meditation, in which you meditate for the peace and harmony of all living beings. As Goenka put it, these sessions were the ‘balm on the wound’ (he was serious about the whole mental surgery thing).

4:00am first morning gong sounds
4:01am I leap from bed, brush my teeth, pull on a hoodie and go back to bed until
4:20am second, “no, really” gong sounds
4:22am I’m in the meditation hall, setting myself up for two hours of drowsy but usually pretty solid meditation
6:20am tummy grumbles for the millionth time and I’m visualising brunch at some cool Melbourne café with a massive coffee to wash it down when…
6:30am breakfast gong sounds. Porridge with stewed figs and pears, fresh fruit.
I eat this delicious warming breakfast outside on the terrace snuggled in my winter coat and watching the sky grow lighter. By the time the sun rises I am back in bed, catching more z’s.
8:00am meditation
11:00am lunch. Plate packed with yummy vegan delights. I eat on the terrace again, then get back to bed as soon as possible. It’s not just that I’m tired. On the second day I realised two things (1) the process is kind of conscious/subconscious simultaneously (although Goenka says there is no subconscious, it’s just repressed consciousness), so I figure the more time I spend sleeping or semi-asleep, the deeper the effects of the meditation will be; (2) the contrast of the bright sun outside is too great to the dark haven of the meditation hall. Most others attending are taking two week breaks from their regular full time jobs to be here – they want sun and nature because it’s a holiday. But I live in sun and nature all the time. For me, the sole priority is vipassana.
11:30am I crash in bed. My dreams vary from entertaining (I adopt an orphan baby unicorn which I find standing next to a zebra crossing) to challenging (a rigorous reassessment of the breakdown of my longest relationship and the guilt I still held. Meditating later, a voice spoke: ‘let it go’. I did).
1pm-5pm meditation. I referred to this portion of the day as ‘the marathon’
5pm gong for tea break; we chug tea and inhale two pieces of fruit each.
5:05pm bed. See above.
6pm meditation
7pm lecture by Goenka on DVD. He is a great storyteller; articulate, funny, interesting and wise. And his Burmese-Indian accent is brilliant, although the first ten times he said ‘equanimous’ I thought he was discussing economics. The lectures cover the technique practiced during that day, a vague sketch of the days ahead, some theory and stories about Buddha’s experience with the technique, amusing anecdotes which always tie in nicely to the topic at hand, frequent encouragement to ‘work diligently’. Occasionally he touches on his own story and the transition from wealthy businessman, to sufferer of excruciating migraines, to meditator, to teacher.
8:15pm meditation
9:15pm face-plant in bed 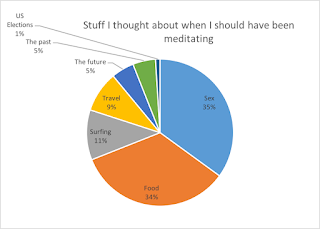 The first two days, my mind revealed itself to be a master of distraction. Some sessions, I ebbed into a deep and beautiful meditation, oscillating between the free flow of energy and observing the knots of tension in my body (my back and neck were super tight from all the sitting). Some sessions, I was locked in a WWF-esque battle with my distractive, sneaky, mean mind, almost unable to focus and constantly calling my attention back. Every time I attempted to focus on the meditation, it unveiled a cavalcade of appealing topics for me to muse on instead, including but not limited to:
> sex
> food
> travel (places I’ve been, places I’ve yet to visit, really need to get to Japan, Tibet, etc)
> stupid things I’ve done (fertile topic)
> The Future
> should I really live in Portugal? Yes. No. Yes. Etc.
> embarrassing princess fantasies
> music
> surfing. running. sweating
> work. the meaning of life. death
> movie quotes. On day 4 I ran through the entire script of Pulp Fiction in my head
> and sooooooooo much more

My mind is as cunning as a pack of foxes when it comes to distracting me from the present moment.
I keep trying to escape it, but the present is the only thing that is real. Past is a memory; future is a fantasy. The only thing that IS, is this moment.
I seem to always experience time as going too slow or too fast. Rarely am I happy to just sit and let it flow at the pace it wants to. 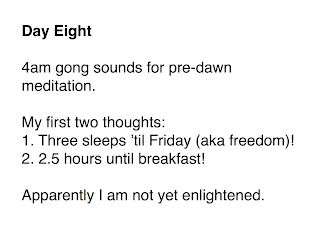 I was holding onto, and during the ten days dealt with, residual issues from unhappy times when I lived in Haarlem many years ago and guilt from a break up five years ago.

We spend a lot of energy on polite interaction and social niceties. Silence, including no eye contact or gestures, allowed me to fully focus on the meditation. It was great to be able to speak again, but the silence – that was magic.

After more than 100 hours of meditation, and really pushing myself all the way to the edge, I realised I am capable of amazing things.

It was rewarding, in the way that stupidly hard stuff is. It burns, like a deep massage that gets right down into the niggly, painful tough spots. A deep massage that lasts 10 days. Apparently, I enjoy those kind of massages.